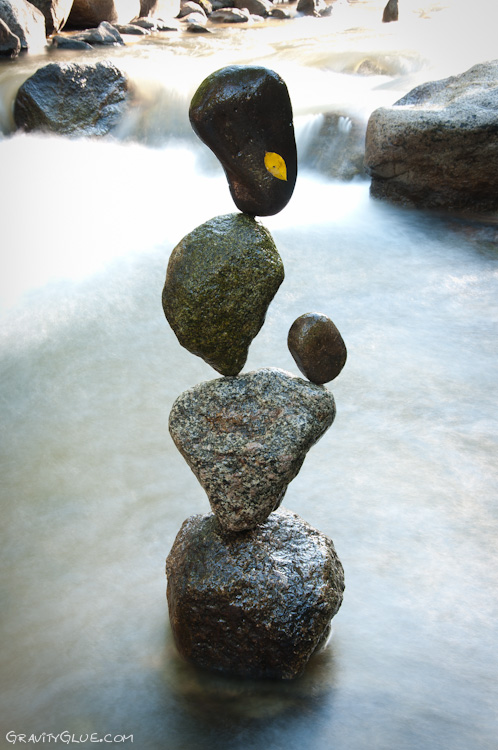 “The religious man of the hunting culture is generally known as a shaman… and a shaman, is a kind of weird individual. And I mean weird in the ancient sense of the word. Not queer. But weird in the sense of magic… because he is a person of a peculiar type of sensitiviy who finds initiation into the shaman role by going off by himself for a long time, into the depths of the forests or the heights of the mountains. And in that isolation, he comes in touch with a domain of consciousness, which is known by all sorts of names… the spirit world, the ancestors, the gods…or whatever… and his knowledge of that world is supposed to give the peculiar powers of healing, of prophecy, of magic in general. The thing that you must note though about a shaman, is that his initiation is found by himself.. He does not receive inititian from an order, or a guru…”

This balance  is relatively technical as it is an example of continuous counterbalance. The top rock counterbalances the next rock down. The collective weight of the two top rocks counterbalances the next rock down.  Everything acts in unison to make a collective equilibrium.  As far as the quote, and according to many testimonials of random passers by, rock balance has a close relationship with shamanism.  Based on my own experience, there is a considerable spiritual dimension to the practice as well as the creations. Some people have described the sensation of spirits dancing among the gardens, as if each balance becomes a collective spirit of the composite rocks. Likewise, each garden has a collective spirit, which is the interaction of the all the composite balances, and so on up or down the scale of the fractal. The main point here is that the rocks have a kind of energy or chi. I noticed this characteristic since my first experiences balancing.  Sometimes I would begin building a garden to keep myself company in a lonely place.  I do not want to call myself a shaman because it is not my business to classify such. However, through my experience with nature and solitude, the quote simply reminded me of my rock balance work.  There has always been an inherent connection i’ve felt with my surroundings and the whole planet whenever I balance.  It is as if my ego disappears during the process and I am simply another force of nature possessed by some other spirit, perhaps one whose origin is within.