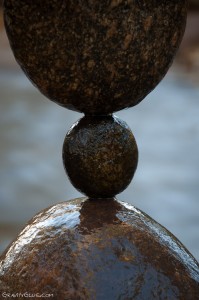 “I once asked a group of high school children: What do you mean by a ‘thing’? And first of all they gave me all sorts of synonyms. They said it’s an object, which is simply another word for a thing. It doesn’t tell you anything about what you mean by a thing. And finally a very smart girl from Italy, who was in the group, said: A thing is a noun. And she was quite right. A noun isn’t a part of nature, it’s a part of speech. There are no nouns in the physical world. There are no separate things in the physical world either.”

Many people stop and ask me if there is a name for this art. I always hesitate, partly because there are so many names in various languages. I normally default to telling whoever the simplest of appropriate nouns.. usually: “Rock Balance”.  If I feel talkative I sometimes go into more detail with the different names I’ve encountered. But the interesting part is, there really is no “noun” to comprehensively describe the art.  In my initial hesitance when people ask, It often enters my head to just say “everything”, which would require a great deal of explanation to describe the scope of what I’m referring to. I’ve also gotten used to the way spell-check rejects the word “balancer” everytime… ha. funny. perhaps we can make it a new noun so balancers can really exist ;)